Victory and Defeat, Life and Death, Blessings and Curses 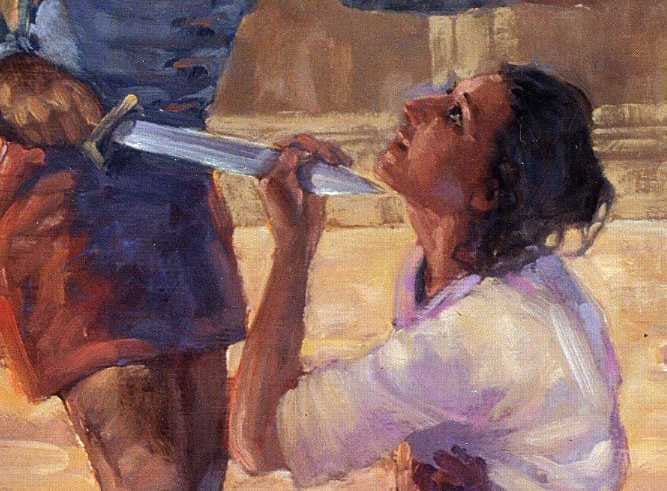 St. Cyprian’s On the Lapsed (The Lapsed) and The Passion of Saints Perpetua and Felicity (PSPF) show us the defeat of those who apostatized during Roman persecutions juxtaposed with the victory of those who chose death over apostasy, in fidelity to their Christian faith. Looking at these two texts together the ancient type of covenant fidelity is recapitulated. Christians during the Roman persecutions faced a type of the same choice God posed to the Israelites through the words of Moses before their entry into the promised land, “…I have set before you life and death, blessings and curses. Choose life… so that you may live in the land that the Lord swore to give to your ancestors” (Deut 30:19-20 R.S.V.C.E.). The promised land, Israel, is a type of the heavenly Jerusalem (Heb 12:22), and Christ’s death is the victory, which won for us entry into that land of promise. Choosing death for the sake of Christ is truly a choice for life, and the blessings of the new covenant, in union with Christ’s victory on the cross.

To Abandon Christ is to Turn Away from the Promised Land

The Israelites were given the choice to choose life in the promised land, but on the boarder of the land of Canaan they did not trust the Lord and so they received the curses of the Lord’s covenant (Num 14:10-38). This choice to live for the world to choose Egypt instead of the promised land is recapitulated in the choices of those who fell away from the faith during the Roman persecutions. Grieving at the ease with which too many of the brethren fell, St. Cyprian wrote, “At the first threatening words of the Enemy, an all too large number of the brethren betrayed their faith; they were not felled by the violence of the persecution, but fell of their own free will.” (Lapsed 7). Like the Israelites who trembled before the Canaanites at the report of those who went ahead to reconnoiter the land at Kadesh-barnea, St. Cyprian goes on to describe Christians who did not even wait for their opportunity to be tested by the enemy, but went of their own free will to make the emperor’s sacrifice when they heard the reports of what they might be forced to suffer. They chose to live in accord with the world like those who looked back to Egypt, and they turned away from the promises of Christ.

To Choose Death for Christ is to Recieve Life

St. Cyprian in contrast to his strong language against those who have lapsed in their faith, holds up Ananias, Azarias and Misael who faced their death rather than renounce their God, “even in the flaming heat of the fiery furnace [they] ceased not making confession to God.” (The Lapsed, 31). He then goes on to quote Daniel within this context, who recognized the Lord’s covenant fidelity to those who stay in right relationship with Him. Death, either spiritual or bodily, is the natural result of leaving the world behind and choosing fidelity to the covenant of Christ. However, death does not have the last word as we will see presently, death has lost all its power in the light of Christ. “O death, where is your victory? O death, where is your sting?” (1 Cor 15:55). The way of the martyrs therefore can be seen in a true sense of irony.  The world means for the death penalty inflicted upon the martyrs to be a display of their defeat, but in fact the exact opposite is true. The martyrs smirk at the power of death, and tread upon his head. At the end of Perpetua’s account of her passion, on the day before she is to be martyred, we are given a glimpse into her vision of gladiatorial battle with the devil. She defeats him soundly and claims her victory over death. Her vision was the reality of what was about to happen the following day when she took the red crown of martyrdom for herself. “And I awoke; and I understood that I should fight, not with beasts but against the devil; but I knew that mine was the victory” (PSPF, 10). Through her fidelity Perpetua received the blessings of the new covenant.

From her prison cell her visions of Dinocrates (PSPF, 7) and of her own conflict (PSPF, 10) were like Joshua and Caleb reconnoitering the land of Canaan, surveying the terrain of the conflict to come. Then, like the Israelites at Kadesh-barnea, Perpetua stood at the edge of the promise, and rather than turning back­ to the world, to Egypt and defeat, she pushed forward into conflict sure of the promises of Christ. She chose fidelity to the covenant and through that conflict she gained victory. It might be tempting to see her temptation toward the world to be less than the Israelites, but she was also in conflict with her family. The devil was using her own father and son, to do combat against her. However, in the face of these conflicts she remained steadfast and although she grieved it was for the fact that her father would not rejoice, “And I was grieved for my father’s case because he would not rejoice at my passion” (PS­­PF, 5). This episode is reminiscent of Joshua and Caleb tearing their garments in grief over the Israelites failure to trust in the Lord at Kadesh-barnea.

Considering the new covenant, those who lapsed in their faith and were defeated by their desire for the comforts of the world, renounced the victory over death along with their faith. St. Cyprian makes the point that this is a very serious matter and therefore the road to repentance must also be serious. He was incensed at the cavalier attitudes of some who would quickly pardon this offense without sufficient penance saying, “Their talk spreads like a canker, their conversation is as catching as an infection… more deadly than was the persecution itself” (The Lapsed, 34). However, God is good, and he will not leave his children without hope before their final test. Even for those who were tested and defeated God’s mercy endures. St. Cyprian aware of this divine mercy ends The Lapsed on a positive note outlining how through prayer, penance and almsgiving even a soldier defeated can return to the battle, and if he does so, “he will earn not merely God’s forgiveness, but His crown” (The Lapsed, 36). In the same manner the Israelites who wanted to turn away from the promised land in favor of Egypt were not cut off from God but wandered the desert in penance for 40 years.

When placing St. Cyprian’s On the Lapsed and The Passion of Saints Perpetua and Felicity within the context of salvation history we see the reoccurring pattern of God drawing his people into covenant fidelity through his divine pedagogy. Although we falter and risk defeat, he strengthens us with the examples of those who have gone before us in victory. The themes of victory and defeat play strongly into these texts, but even those who are temporarily defeated are not left without hope. Through the mercy of the new covenant, we begin to see the victory of the cross in everything, most especially in the redemption of those who appear to be defeated. Death does not have the final word for those who place their hope in Christ. St Cyprian reiterates the results of defeat in the covenant context of death and cursing, “So it is that, through the presumption of certain folk who beguile with false promises of salvation, all true hope of salvation is destroyed.” (The Lapsed, 34). He then, in the same paragraph, articulates a path to victory, life and blessing, “…to him who by good works of persevering charity pleads to the Lord for Mercy on his sin–to such He can extend His mercy” (The Lapsed, 36). We see also in the closing of the martyrdom of Perpetua and Felicity, that we should, “read these witnesses likewise, as being no less than the old, unto the Church's edification; that these new wonders also may testify that one and the same Holy Spirit works ever until now” (PSPF, 21). We read then that the accounts of these martyrs are to be seen in the same context as the covenant fidelity of those who went before them like Ananias, Azarias, and Misael referenced above by St. Cyprian. Therefore, within the context of these texts we see that choosing death for the sake of Christ is truly a choice for life, and the blessings of the new covenant, in union with Christ’s victory on the cross.

Previous Post The Creed Article 4: Jesus Christ suffered under Pontius Pilate, was crucified, died, and was buried
0 items in your cart