What was the original sin? 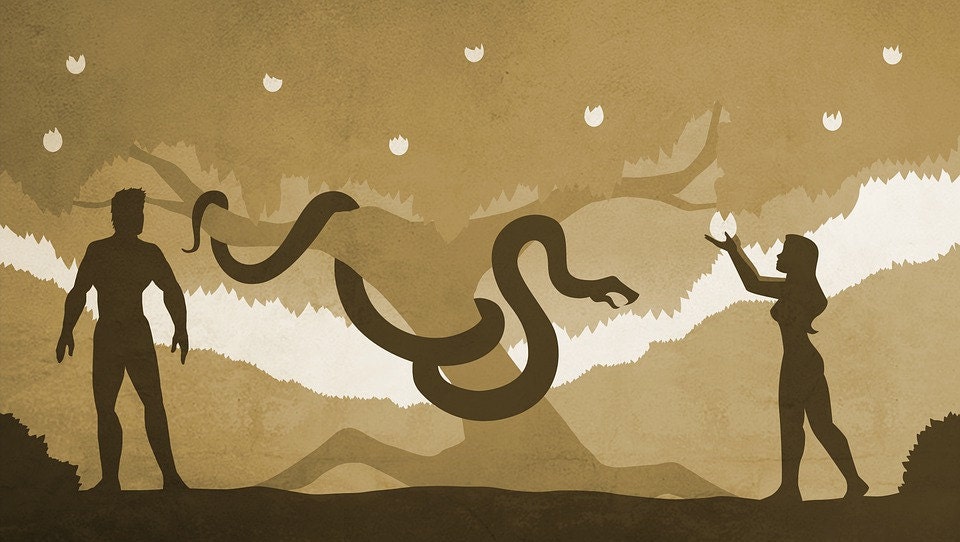 The Catechism of the Catholic Church describes man’s first sin:

“Man, tempted by the devil, let his trust in his Creator die in his heart and, abusing his freedom, disobeyed God's command. This is what man's first sin consisted of. All subsequent sin would be disobedience toward God and lack of trust in his goodness.  In that sin man preferred himself to God and by that very act scorned him. He chose himself over and against God, against the requirements of his creaturely status and therefore against his own good. Constituted in a state of holiness, man was destined to be fully ‘divinized’ by God in glory. Seduced by the devil, he wanted to ‘be like God’, but ‘without God, before God, and not in accordance with God’” (CCC 397-398).

The Original Sin of Adam and Eve was a personal sin committed by an act of disobedience by our first parents, but the origin of their sin was not in the disobedience itself, but in the pride that replaced the trust in man’s heart.

God created us for covenant

All of creation reflects God’s goodness, even the devil, and the fruit on the tree of the knowledge of good and evil. Man’s first sin was the placing of the lesser good of knowledge and a desire to be like God, over the greatest good, God himself. As the perfection, and source, of all goodness any choice apart from God’s will (which is God himself as there are no parts in God) is necessarily a choice toward a lesser good. “This means that from the beginning the Creator reveals himself to a rational and free being as the God of the Covenant and hence of friendship and joy but also as the source of good and therefore, of the distinction between good and evil in the moral sense.” (John Paul II I.7)

What Adam and Eve had in the garden was Covenant with God the sign of that covenant was obedience to God, the blessing of that covenant was friendship with God and all the preternatural gifts that came with it including original justice, original holiness and the sanctifying grace necessary to attain heaven. The curse associated with breaking that covenant was fitting, “the knowledge of evil.” Adam already knew goodness, Adam walked with goodness in the garden. Jesus himself tells us, “No one is good but God alone” (Mk 10:18 RSVCE). Adam was created for covenant with God, and in the image and likeness of God, with a will, an intellect and the ability to choose.

Through the lies of the Devil, Adam and Eve thought they were choosing to acquire something that God had withheld from them. They had placed their will in opposition to God’s, in competition with Him, “For pride imitates loftiness of mind, while you are the one God, highest above all things. What does ambition seek except honor and glory, while you alone are to be honored above all else and are glorious forever?... In a perverse way, all men imitate you who put themselves far from you, and rise up in rebellion against you.” (Augustine Confessions ch6 13, 14). That first act of pride, the setting of man’s will against God’s, echoes down through the ages because of concupiscence. Our wills and intellects separated from the sanctifying grace of God are tempted by the lesser goods offered by the world, the flesh and the devil. The choice of those lesser goods, especially the good of our own will through pride, seeks the same thing that the dragon sought in the garden of Eden, company.

The saying goes, “misery loves company.” That is true of our nature separated in misery from our telas, our purpose, to be in union with God. St. Augustine illuminates this reality when recounting his communal sin of stealing the fruit from the pear tree. “This would have pleased me not at all if I had done it alone; nor by myself would I have done it at all. O friendship too unfriendly!... arising not from desire for my own gain or for vengeance, but merely when someone says, ‘Let’s go! Let’s do it!’ and it is shameful not to be shameless!” (Augustine Confessions ch9.17) St. Augustine’s sin echoes the sin of Adam through the experience of sinning with others. Eve sins at the prompting of the Devil, and Adam at the prompting of Eve. Eve and the Devil bring others into their sin. Pope St. John Paul II sums up this relationship, “And man, by yielding to the suggestion of the tempter, became the slave and accomplice of the rebellious spirits!” (John Paul II II.7) Our fall from original grace, and our nature as creatures created to be in relationship, result in mankind finding comfort in the sharing of our privation with each other.

The distinction between good and evil mentioned above is simply the act of exercising that choice to do the good, or not to. Moral evil is the privation of good resulting from the will not choosing it. Concupiscence, the tendency toward evil, entered all of mankind contained within Adam, when Adam first failed to choose the good. “Therefore as sin came into the world through one man and death through sin, and so death spread to all men because all men sinned” (Rom 5:12). We are not culpable for the personal sin of Adam, but that primordial event damaged our ability to be in right relationship with God. Pope St. John Paul II put it this way, “The consequences of this sin was death as we know it … we note that the Tridentine Decree refers to the ‘sin of Adam’ inasmuch as it was our first parents’ own personal sin (…) but it does not fail to describe its fateful consequences in the history of mankind” (John Paul II IV.5). We were created to live in friendship with God – the infinite – this is our purpose, but our separation from God due to original sin broke the relationship infinitely and we are utterly incapable of bridging that infinite gap to come back to the Father on our own power. Those are the consequences of which Pope St. John Paul II speaks. Jesus’s act of redemption was necessary for our salvation, because only an infinite act – which must be an act of God – would have been sufficient to undo the consequences of breaking a covenant with infinite being.

Through the first Adam, sin entered the world in an act of rebellious pride. Man used his likeness with God to reach for equality with God. However, in the fullness of time God would redeem mankind’s brokenness. God would restore our path to friendship with him by joining himself to our nature and becoming a new Adam, to bring life to the world where the first Adam brought death. “…Christ Jesus, who, though he was in the form of God, did not count equality with God a thing to be grasped, but emptied himself, taking the form of a servant, being born in the likeness of men” (Phil 2:5-7). In pride man tried to become like God and fell, but out of love, God became like man so that he could rise. God made a new covenant, but just as we used our will and our intellect to fall, we must also use them to be restored to friendship with God through Baptism and perseverance in faith.

Previous Post St. Peter’s Strength Originates in His Weakness
Next Post The Creed Article 4: Jesus Christ suffered under Pontius Pilate, was crucified, died, and was buried
0 items in your cart